Do you ever find you get the same messages from multiple places at the same time? Sometimes they’re subtle; sometimes they’re a two-by-four applied to the side of the head. Whichever, it’s important to listen to them. Or try to figure out what the point is.

My recent message, slightly paraphrased, has been “Believe it and make it happen.” Which I firmly believe in…and yet sometimes (okay, often) forget. I got that from two different sources the same day—the kind of thing that makes you notice it: a posting from a friend on Facebook of a simple black-and-white graphic that said,

“Believe and it will be so.”

Then I ran into a blog post that linked to this article: http://joelrunyon.com/two3/an-unexpected-ass-kicking

It is, frankly, all another spin on the popular Law of Attraction, or the Secrets of the Universe, etc. Visualize it, believe it, and you can make it happen. No matter what. Do I believe that? Hell, yes. I have an agent—my dream agent. I have a new(ish) job that frees up time and energy for writing. I got my kids into a new, better school. Life is working like it’s supposed to at the moment. And I’m working on new visuals to focus on.

Nothing is withheld from us which we have conceived to do. Do things that have never been done. Are those words to live by, or what?

[The other ongoing message from the Universe I haven’t figured out yet…that’s the Eiffel Tower. It’s cropping up in songs, photos, webpostings…my daughter even painted a picture of it out of the blue the other day, and when I asked why, she couldn’t tell me.  (Yeah, shades of Close Encounters!) I’ll let you know when I figure that one out.]

In my SF world, a computer program would crash and the space station would plummet into the nearest star, killing all my characters…or corporate online bill paying would glitch, and the oxygen flow to the moon base would cease. Oops. The End.

Last weekend was technology hell for me—computers, cell phones, Kindles, whatever. All acting up for no reason. It’s enough to make one check for unexpected sunspot activity…and then wonder if Mercury is in retrograde when science fails to provide an adequate excuse.

On Friday, I was shutting down my computer and Word asked if I wanted it to send information to Microsoft “to help with the grammar and spelling function of Word”. I looked at what it was wanting to send and discovered random snippets of my manuscript—dialog, action scenes, notes to myself—and segments of emails I had sent. HUH?? NO, I do NOT want to randomly send out-of-context proprietary information to a major corporation, thank you for asking first. Sorry, but, WTF?!?!? Still haven’t figured out what setting is letting that option even exist. I’m still worried that rather than turning it off, I’ve just said ‘don’t ask before you send it’…the options weren’t particularly well worded. (Do I think that’s an accident? No.)

When I got home, I let the kids get on the computers while I started dinner. The plan? Pay a couple of bills online, then get major word count on the page.  Five minutes later. “Mo-omm! My game isn’t working.” Followed almost instantly by, “Moooo-om! The computer won’t let me connect to Skype! I’m talking to my friend!” *sigh* Go over to the main desktop, check the internet, all seems to be working fine. Go check my son’s machine. No internet. Daughter’s? Same… Not only are they not connected, our network isn’t showing up as an option.

Go back to the main computer, check network connections. It says all is fine. So much for high-tech tracking software.

Go to the actual wireless modem…and it’s got a flashing light on it. Sigh heavily, hit reset. Yell, “That get it?” “NO!” Well, damn. That usually fixes it. Rebooting the computer anyway doesn’t work. Unplugging and replugging everything doesn’t work. I go online from the desktop (thankfully able to do it hardwire) and start looking for solutions. First discovery? *Horrors!* My modem is nearly two years old and therefore obsolete—no links to the manuals, or handy references anywhere.

My husband is home by this time, in full Eeyore mode. “It’s dead. We’ll just have to buy a new one. And it probably won’t work on the old desktop. There’s no point. Why even have Internet?” *argh* This, in turn, panics the kids… “No Internet? No computers? EVER? Wait…but I really need to [insert Skype/WoW/Nickelodeon/Disney/email]!”, which morphs seamlessly back into “Is it fixed yet? You are going to fix it, right?” Me, I’m wondering if local law enforcement has ever seen death-by-modem before.

Found one website that suggested rather than unplugging/replugging, unplug and wait FIVE minutes. So I waited more like fifteen, and all was fine when I plugged it back in. *whew* (And that’s a high-tech fix??) Any explanation of why it just stopped working n the first place? No…frankly, I’m just grateful I wasn’t doing a midnight WalMart run for a new modem. It was nearly 9:30 p.m. before I got it running again, so I had to deal with the turmoil of it being bed time and too late to call friends back, finish the games, etc. Some days the Mom job has drawbacks…

Saturday, my daughter accidently squished my Kindle—which was out of warranty by one month to the day. I know as an author, I should be fully embracing the e-reader, but my budget is arguing with me at the moment—and winning. All I can say is, I’ve owned hundreds of paperbacks and hardbacks for decades that have never broken and become unreadable when a reader falls out of bed.

Sunday, it was the ‘smart phone’ which decided to lock itself down after wildly scrolling multicolor type too small to actually read. Again, all hail the search engine for solving that one for me, too—on an old forum post found by searching on “red triangle with exclamation point” and the phone model. Turns out, it can be reset by pushing the volume button up while pressing the power button at the same time. Sure, that’s logical. I would have thought of that on my own next, really! *sigh* Still no clue as to how it actually got set to that mode in the first place—just an unlucky combination of buttons touched by accident as my daughter handed it to me? I’m thinking design flaw.

I’m overall annoyed. And lacking in trust of technology. And celebrating the fact I don’t have to rely on a computer for oxygen—or gravity—on a daily basis. Just saying, it may be a while before technology features as the hero in one of my books.

For all of the intrigue and mystique around Being A Writer, the biggest part of it is simply finding the time to get the words on the page. That’s also the hardest part of it.

The day job and family stuff and the mundane necessities like grocery shopping and feeding the kids eat up a lot more time than anyone realizes. Add to that the computer related stuff—email, Facebook, Twitter, Pinterest, and so on—then double that if you’re a writer, because not only are you doing that for your personal life, you’re doing it with a different focus (and probably different account names) for your career…your business pages/feeds on FB, LinkedIn, or Twitter; your book boards on Pinterest; your website or blog… Nothing quite like checking in on your webpages and discovering, “Whoops, haven’t actually posted anything new for nearly five weeks. Way to go, writing professional!” *sigh*

Of course, there’s the fun aspect to some of these things. Playing with graphics and layouts and fonts. Finding images that fit your settings, heroes, and heroines. Learning new skills like computer graphics or HTML or newsletter layout. Meeting new people at meetings and conferences. Writing short, personal stuff like blog posts or Tweets or newsletter updates rather than worrying about interweaving multi-book subplots. Sure, we’re swamped, but it is also FUN.

I remember ‘back in the day’ when I used to hear writers complain that they no longer had time for television, or even much reading-for-pleasure, and would think they must just be doing it wrong. Yeah…belated apologies for those thoughts, friends. I’ve discovered it is much harder than it looks from the outside. Multitasking and modern electronics are great. Sure, I can write at the pool or basketball practice…but it’s not what I’d term quality writing time—and a few hundred words, not a few thousand.

Add in the guilt, which we can all appreciate. Day-job guilt, especially in this economy…wait for lunchtime to open those emails…wait…wait… Mommy guilt…surely I don’t resent the reading time with my own children? (but, oh, am I grateful they are now out of rhyming books and more into things like Percy Jackson and Harry Potter!) Homeowner guilt…on to the next chapter to get the heroine out of trouble or finally trim the hedge between us and the neighbors?  Writing chapter member guilt…do not even think about raising your hand to volunteer to head a committee this year!! Extended family guilt…how long a drive is it to the family reunion…didn’t we just go last year, er, the year before…?

And yet, it’s the words on the page that are the important part. Without those, we don’t need the website, the dual FB/Twitter accounts, won’t be getting the emails we’re so eager to answer, won’t get fans to write a newsletter for, and won’t have books and characters to talk about at conferences and with industry professionals.

Major congratulations to my buddy Kathy Altman for her second sale to Harlequin SuperRomance! The sequel to The Other Soldier will be published in Summer 2013. Looking forward to reading Joe’s story! Way to go, Kathy!!

July was not the month I expected it to be. I had plans for July—writing plans. Silly, silly me. The Universe obviously had other plans for me. The East Coast got hit by a weird storm—predicted to be a typical “summer thunder storm”, instead, we got slammed by something they refer to as a “land hurricane”. (I’m a bit of a severe weather junkie, and had never heard the term derecho before.)

Where I live, we got spookily high winds and a bunch of rain. My mom, who is in her mid-80s, had three huge trees come down in her yard. We got lucky. Really lucky. No injuries and minimal damage to the house. However, she was days without power and the whole family has been dealing with insurance guys and contractors. For weeks. Best quote was from one of the tree guys when they brought the crane (yes, I said crane) in to remove debris. “You know, there’s no rational reason for three trees falling down at the same time to fall in three different directions. One of these houses should be crushed.”

Over a hundred-thousand pounds of tree trunk later, it is ‘suddenly’ August. My writers’ group starts up again with the new year of meetings in September, and I’m on the board now. School is about to start again for the kids, and they need stuff. The annual cycle continues.

The V of trees–one front, one back. 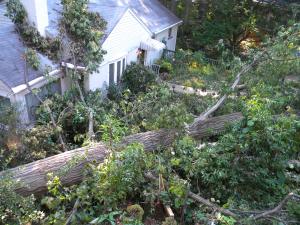 One-third of the 100-foot tree, cutting through Mom’s front yard.